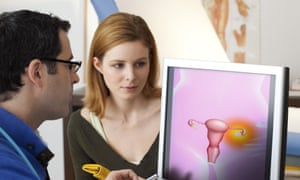 PCOS is linked to abnormal levels of insulin which causes ovaries to increase production of testosterone.

Daughters of women with polycystic ovary syndrome, a common disorder that can cause excessive body hair, acne and fertility problems, are five times more likely than the average woman to develop the condition, a major study has found.

Researchers in Sweden examined the medical histories of nearly 30,000 women and their mothers. The records from national registries showed that 3.4% of women born to mothers with PCOS were later diagnosed themselves, compared with only 0.6% of women whose mothers did not have the condition.

The greater risk was confirmed in a smaller study that followed the health of 35 Chilean women from birth to adulthood. Of the 21 women whose mothers had PCOS, 15 met the medical criteria for a PCOS diagnosis. Only one of the mothers without PCOS had a daughter with the disorder..

“Our work shows that the daughters of women with PCOS have an increased risk of developing the disorder,” said Elisabet Stener-Victorin, who led the work at the Karolinska Institute in Stockholm. “This is an under-recognised condition. Many women out there have either diagnosed themselves or are not diagnosed and are not feeling good.”

Nearly one in five women of reproductive age in the UK is thought to have PCOS, but many women only find out after several years of medical investigations. Despite its widespread impact on women’s health, the causes and risk factors for PCOS are still largely unknown.

The condition is linked to abnormal levels of hormones, in particular high amounts of insulin, the hormone that controls sugar levels. The extra insulin causes the ovaries to overproduce testosterone, which in turn can disrupt the woman’s periods and make it hard to get pregnant. The condition, which also raises the risk of type 2 diabetes, is exacerbated by obesity.

Previous studies of PCOS suggest that genetics explains only 10% of its heritability. To further understand its drivers, Stener-Victorin ran a series of animal studies. She found that when mice in the late stage of pregnancy had testosterone injections to mimic PCOS, their female mouse pups grew up to have PCOS-like symptoms. The disorder was passed on for up to three generations. The findings suggest that high levels of male sex hormones in the womb, which are brought on by PCOS, are a major factor in passing the condition on.

Writing in Nature Medicine, the scientists describe how they identified four genes that were expressed at abnormal levels in both the mouse eggs and in serum taken from daughters of women with PCOS. If further work confirms the genes’ role in PCOS, they could potentially form the basis for a screening test in young women, Stener-Victorin said.

“It is very important for women with PCOS to be diagnosed and treated, if possible maybe lowering the androgen levels, because it may affect their future children and grandchildren,” Stener-Victorin told the Guardian.

Doctors tend to rely on a combination of assessments to diagnose PCOS, such as infrequent periods, high levels of testosterone and ultrasound scans, which can often pick up affected ovaries.

The condition has no cure, but obese people can improve their symptoms by eating a diet rich in fruit and vegetables and reducing their weight. Many women who struggle to conceive because of PCOS are helped with drugs such as clomifene, which can re-establish regular periods, and metformin, a diabetes drug that helps lower insulin in the blood.

“This group has done some excellent animal work to understand the mechanisms behind PCOS, but it is too early to extrapolate the findings to humans,” said Stephen Franks, professor of reproductive endocrinology at Imperial College, London. “There are indications that there are transgenerational effects of PCOS in human offspring, but we need more evidence to fully understand the picture.”